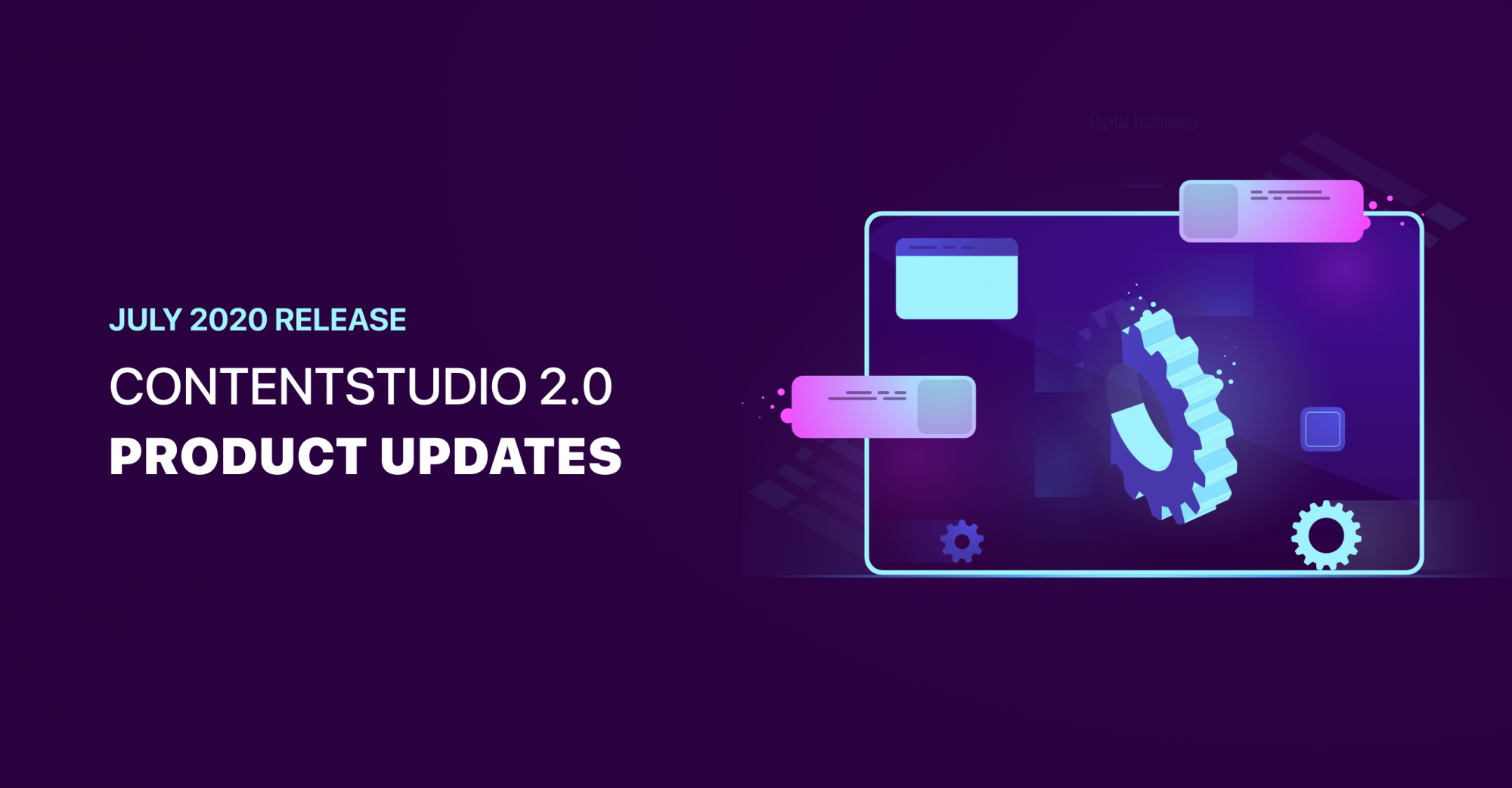 I hope everyone has been enjoying their summer. This month, we at ContentStudio, are excited to introduce loads of new feature updates. These include new billing and plan pages, Image Editor, Location Tagging, Images and Videos Preview, Searching Emojis in Composer, multi-images posting for LinkedIn and SO much more!

Plus, we have also worked on various improvement updates, bugs, and fixes!

So, are you excited? We really hope you enjoy these new features—jump right in and give them a try.

We have rolled out a major update to our billing section that makes it seamless to manage your subscriptions, upgrade their plan, or increase individual account limits.

You’ll be able to see the current subscription plan that you are enrolled in and your next renewal amount on the date.

You can now download the invoices or the payments that you have made for the purchases. 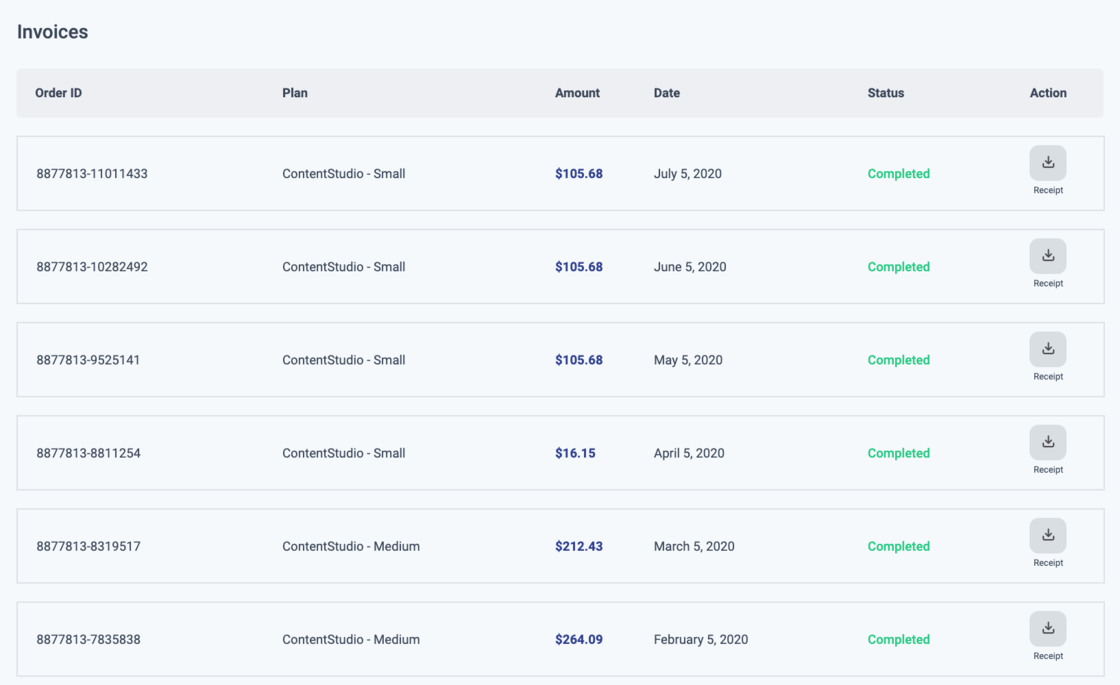 By clicking on the receipt icon, you can print or download the invoice.

You can see the subscription credit card details that are used for your main subscription. 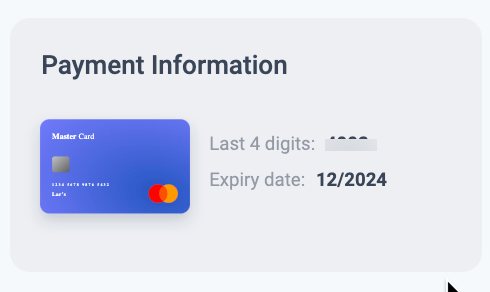 4. New design for the consumed limits

We have rolled a new design for the limits that are consumed and total no. of limits against your account. 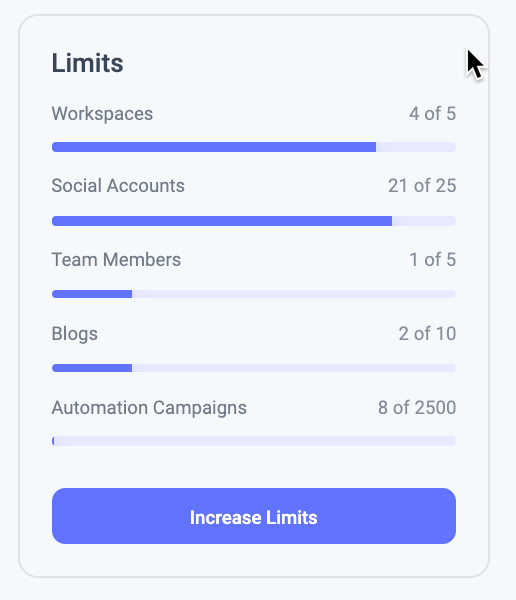 Now, you have the option to increase individual account limits instead of upgrading to the higher plan.

For example, if you need 3 additional workspaces, you can increase 3 workspaces by clicking on the “Increasing Limits”. 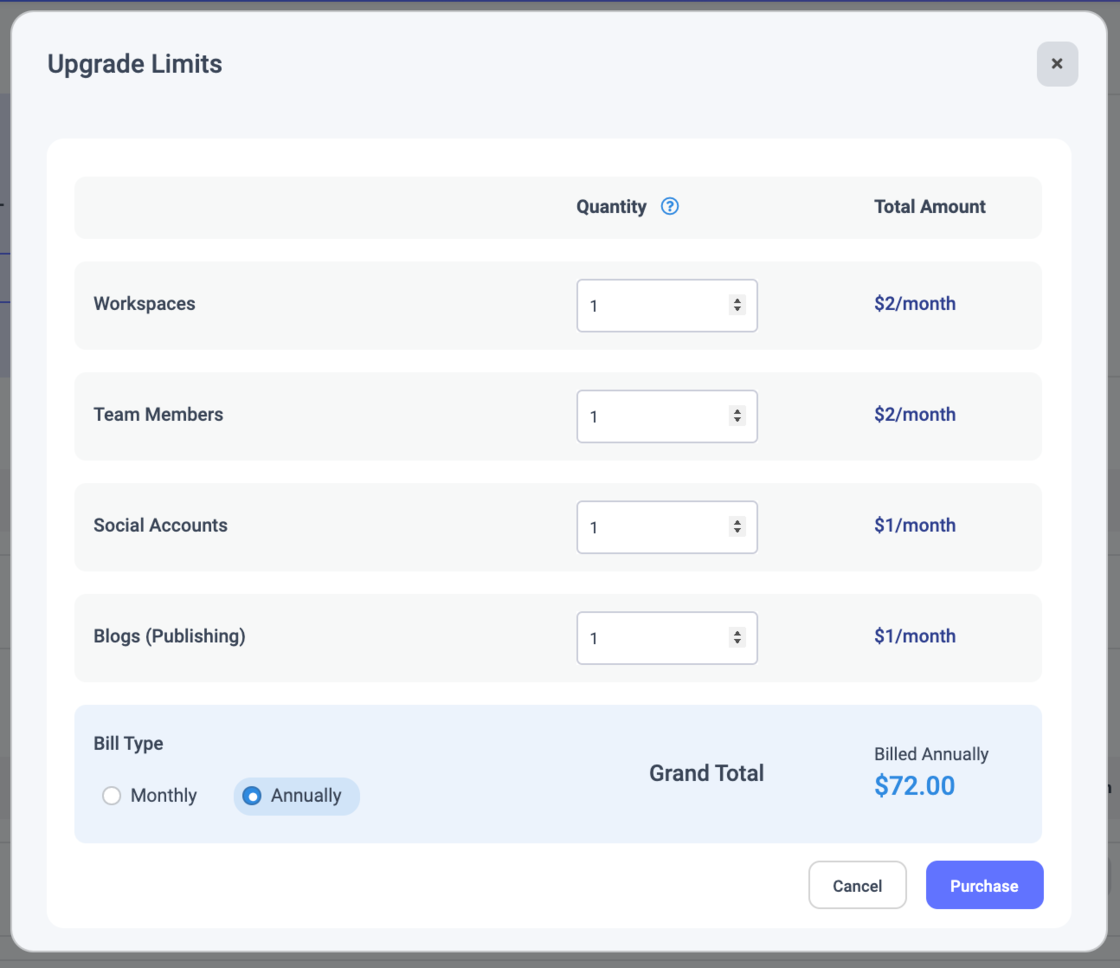 NOTE: For the monthly payments, the amount should be greater than $10/month.

If you’re bored of the plain old text that you fear that no one will read, or if you want to get your view across in a more lively manner, I have a solution for you:

With this latest update, you can search up relevant emojis in the Composer Box and add in those along with your text! 👻 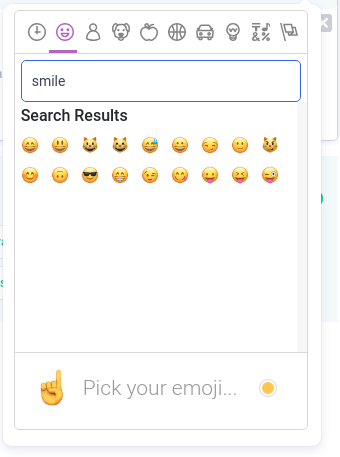 All the relevant “smile” emojis will pop up, and you can select the ones that suit you best! 😎

With this recent improvement, we aim to provide additional context to your LinkedIn posts to help users tell a “story” for better understanding; the users now have the option to upload the multiple images on LinkedIn.

Previously, they could only upload a single image and it was quite a limitation for some users that wanted to express their post with multiple images! 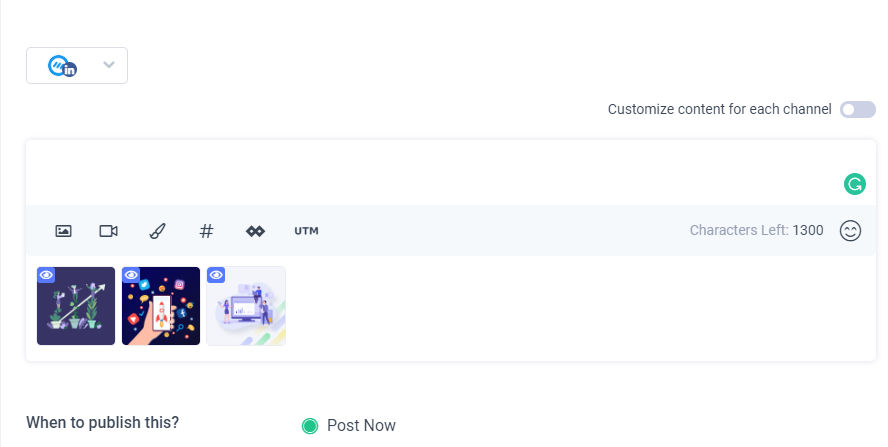 There are various ways you can make use of this feature on Linkedin to boost your professional profile. From your company events to a series of pictures explaining new products/services, or multiple graphics explaining a concept!

Preview Image or Video While Uploading in Composer & Planner

We understand the importance of visual marketing. It is no surprise that it ultimately yields higher engagement and increased reach! That is why we encourage our users to schedule multiple images through ContentStudio.

To ascertain that you have uploaded correct images, we have introduced a new feature that lets you preview images or videos before you post them! 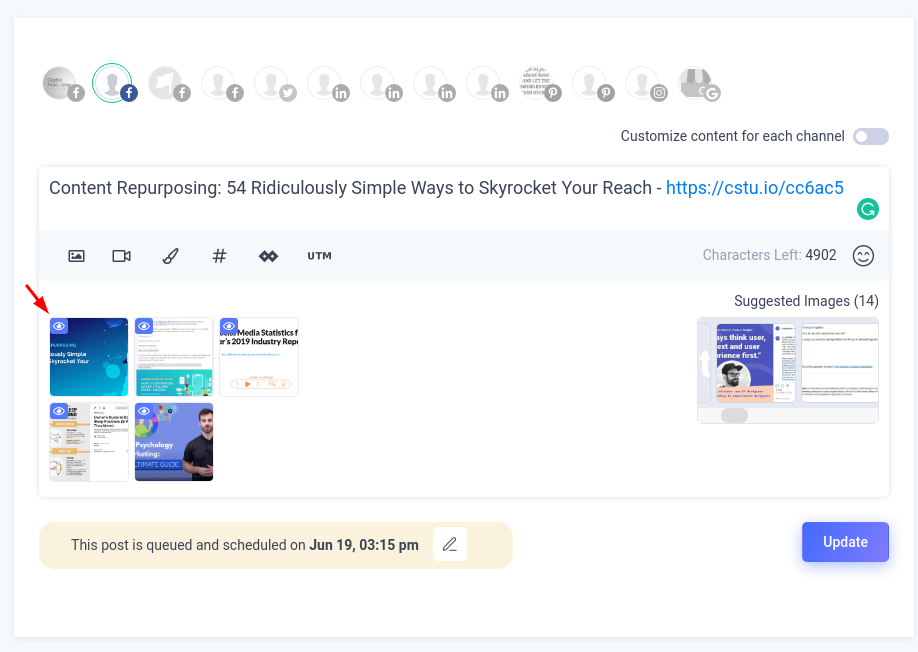 We have changed a few things regarding video uploads!

1) You can choose the best thumbnail from the Suggested Thumbnails

2) By clicking on the video uploaded, you can see the preview. 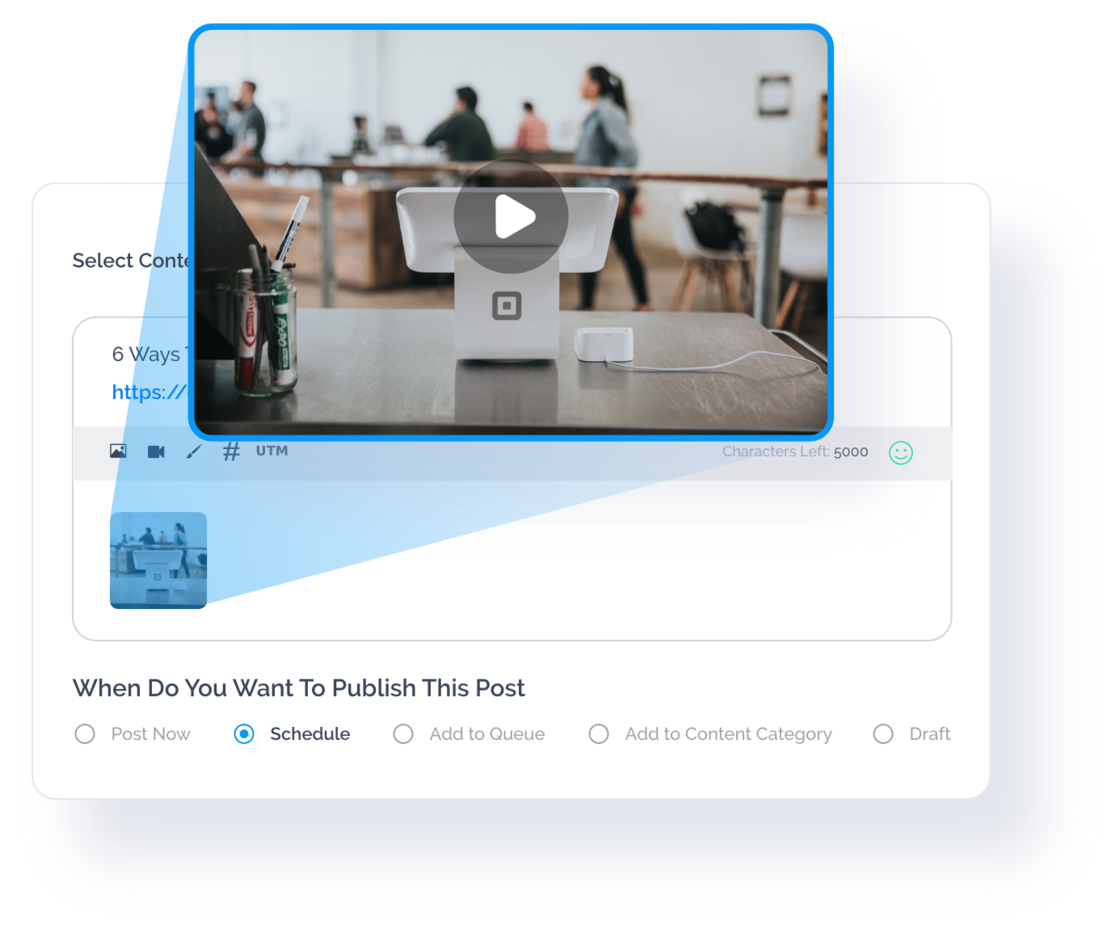 Here’s a gif how it works:

Want to optimize your images or modify before they are shared with the social media channels, well, we have got exciting news for you.

A new image editor has just landed on the ContentStudio! Wondering out how it works?

Just click the paintbrush icon located on the image uploaded. You can select your favorite filter, play with the colors, and set up a border to your picture:

To make sure you are uploading the right image, we now provide an option to preview the image before publishing it.

For example, if you have uploaded a picture to the Composer, you are given an option to preview by just clicking on the uploaded image.

You can see the preview for those images by just clicking on the image that is showing in the preview.

Here’s how to preview in Planner: 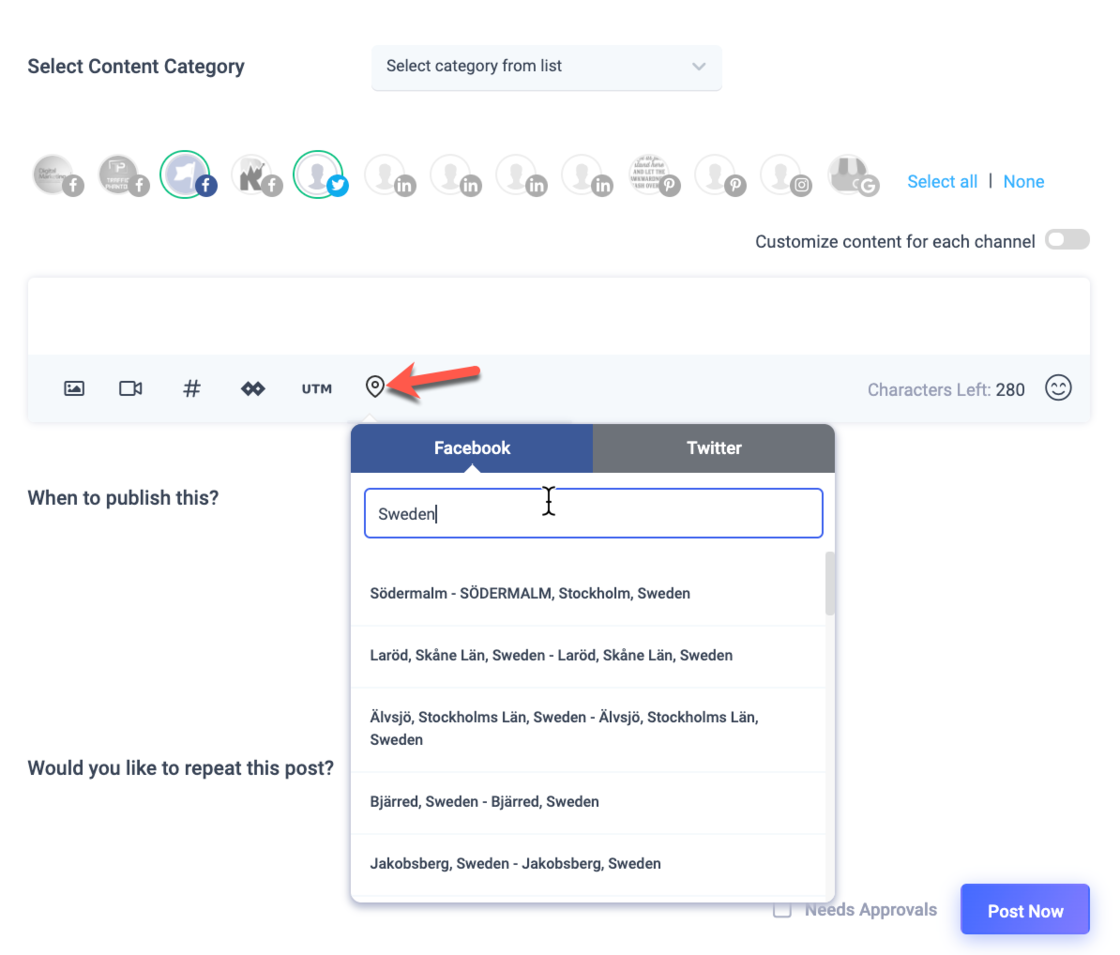 PRO TIP: This will help to tag your images’ location of your world tour! That is when we stop quarantining! 😉

Showing the location along with the Page

If you have the location added to your Facebook page, it will now be showing along with the page name. 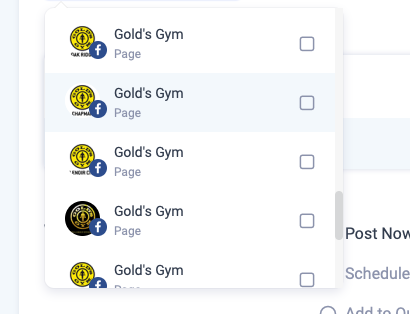 Using a location basis, you can identify which account you are referring to. This will help with the confusion and make you choose the correct page!

As can be seen, locations are now visible alongside the Page name: Leave no room for mistakes!

Clear Text for the Customized Content for each Channel

By clicking on the “Clear all content” will erase anything that the user may have added to the social media box!

So, if you feel like you have messed up, start afresh: Help Material For the Connection of Social Accounts

If you’re having trouble connecting to Facebook pages and groups, don’t worry, we have added a guide that details the steps that you should follow to make sure you have properly connected them: Are you managing a page where each of your posts gets hundreds of comments? It must quite cumbersome to manage comments, and making sure you reply to your comments at the earliest!

With the newest release, not anymore!

Now you can sort the comments based on recency. By default, the replies to the comments are hidden as it can bloat the whole interface with a lot of comments.

That is why we have added a new option to “View replies” against a conversation in Social Inbox.

This aims to help you better keep track of conversations from one single platform at ContentStudio!

We are introducing our new design for Team Members!

You can see team roles clearly defined: between Super Admin, Collaborator, Approver, and Admin. This helps you easily differentiate between a client and a team member. Alongside, you can see their status bar if they’ve joined, or are still pending invitation. First things first. If you don’t have our app installed on your phone already, you can download the Android version from Google Play or the iOS version from iTunes

Now let’s get into all of the exciting updates we have introduced:

Previously, we were using the AlamofireImage library to download the images. We have now replaced it with a much faster, lighter, and highly recommended library called SDWebImage.

In doing so, we have reduced our application size and have made image processing faster, and smoother without causing stress on memory!

That is why we have made the whole code need-based: added better checks that would enable us to do just the bare minimum processing, and still get the job done!

Initially, we were using static variables. Now, we have moved to a completely need-based system, where only the needed, and relevant data (such as the web token) is saved in the UserDefaults for iOS and SystemPreference.

Sometimes, Link Preview would not show up in the application, and in the final scheduled posts for social media networks, particularly, LinkedIn.

To cater to this, we have come up with a new approach: Users can generate Link Preview using their mobile application by tapping on the “next-line” key on the bottom right corner.

We understand users can find the process of connecting and posting to Instagram through ContentStudio quite tricky. For their convenience, we have provided help during run time.

When a user clicks on Post Now in Instagram Notifications, they will see a pop up that explains how the posting works. 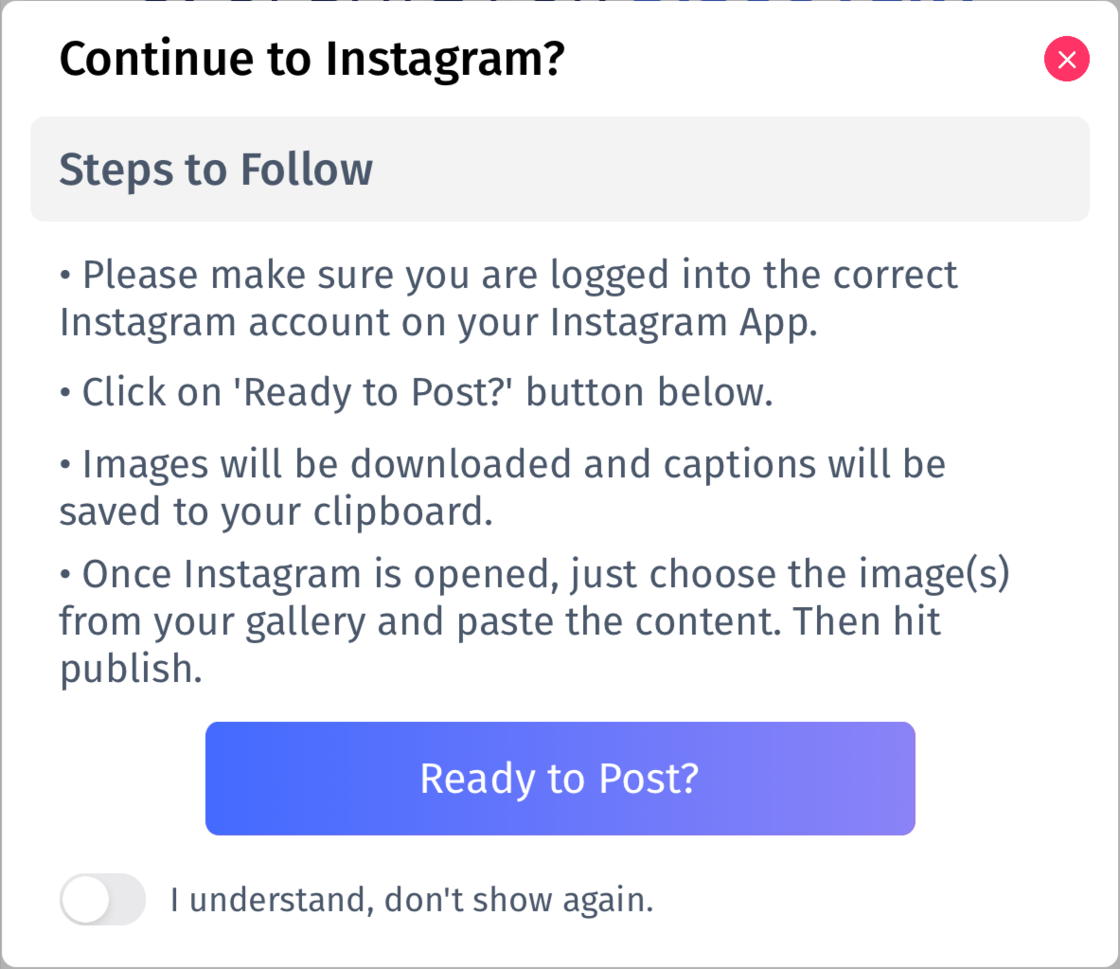 We have improved the Facebook integration improvement where users were having problems while integrating their accounts.

For example, in the Safari browser, they were getting an error that their session has been expired. This has been fixed.

Now you can integrate your Facebook, and let the magic of automation begin!

By taking inspiration from the social media platforms we support in Social Inbox, we have changed how messages were composed!

Before, users were expected to type in their message and then wait for the API to return the response. Only then, the Composer Box would clear up for another message.

This ended up causing unnecessary frustrations as the user kept on waiting.

That’s why we have entirely changed this practice to make things easier.

By pressing send, the message is appended in the conversation with a loader like in the image below, and when it is successful then it changes to a normal message: 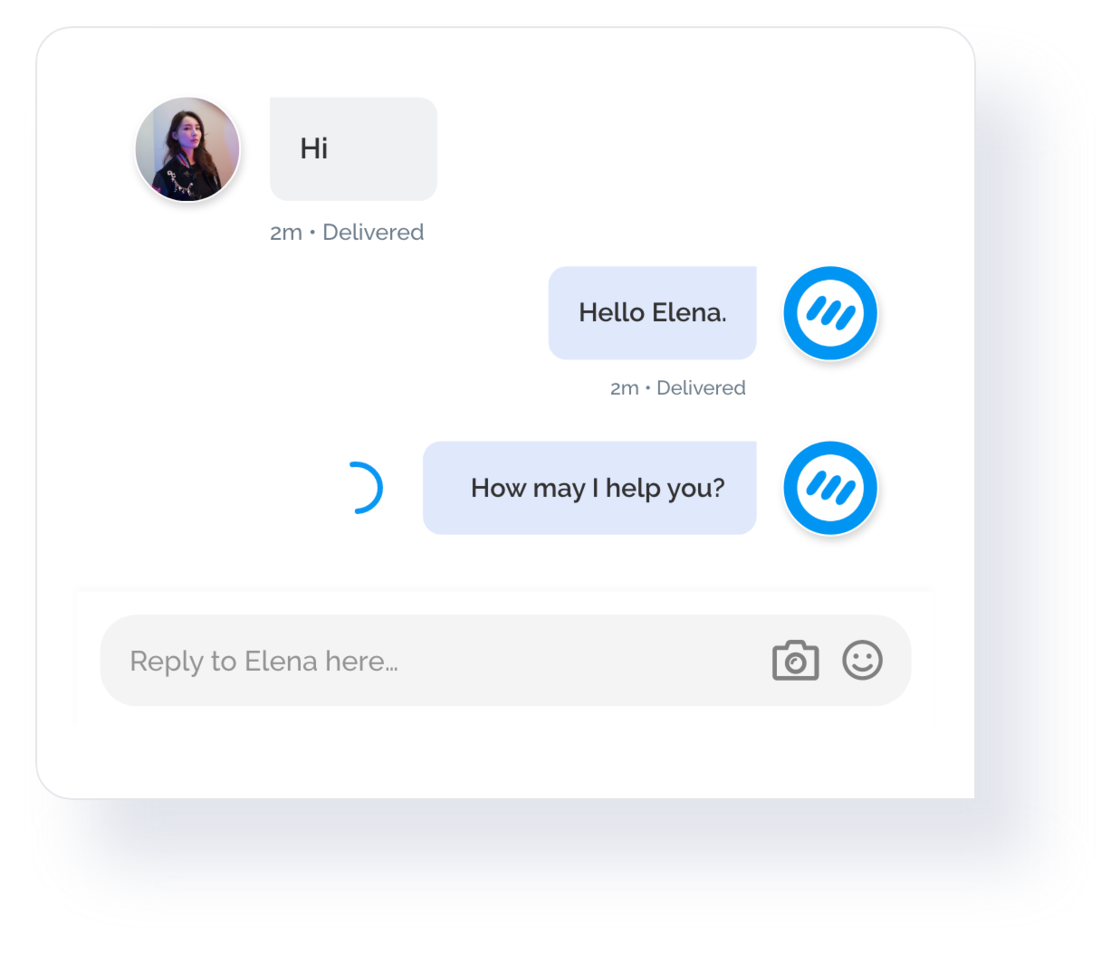 In case the post fails, you will see a Retry and Delete button below the message bubble, making it easier to handle that conversation!

Let’s get into a few more improvements and updates we have worked on for ContentStudio Web Application:

We improved the response rate and load time of the whole application including Social Inbox.

The following User Reported Bugs have been fixed:

Let me know in the comments which feature you liked most, and which are you most excited about! If you want to suggest something to be added to ContentStudio platform, we always appreciate feedback!

Aaaand that’s a wrap from me, have a good day! 🙂 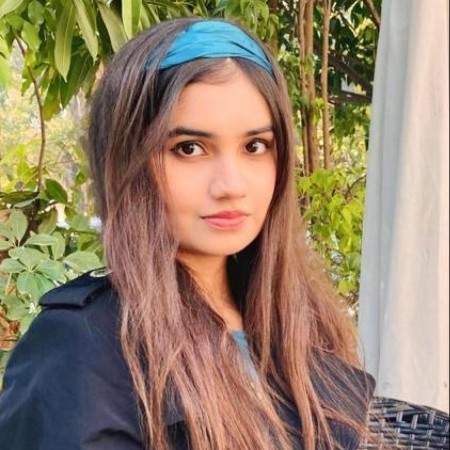 Mariyum Noor is a content marketer who is passionate about learning new things! She writes research-based blog posts for SaaS platforms that are seeking better ways to delight and engage their readers.

Social Customer Service Build your brand’s image with tailored responses for customers interacting on your social channels. Sign Me Up
Social Content Calendar Create, publish, and track content across all social channels via a unified social media content calendar Book A Demo
Instagram Publishing Instantly schedule or publish posts and stories with your Insta audience on the go Try It Free
Social Media Analytics Outclass your competitors with in-depth analytics and make informed business decisions. Get Started Now
Content Discovery Discover trending content in your industry, curate and share it with a sprinkle of your own imagination Sign Me Up

Other posts to check out 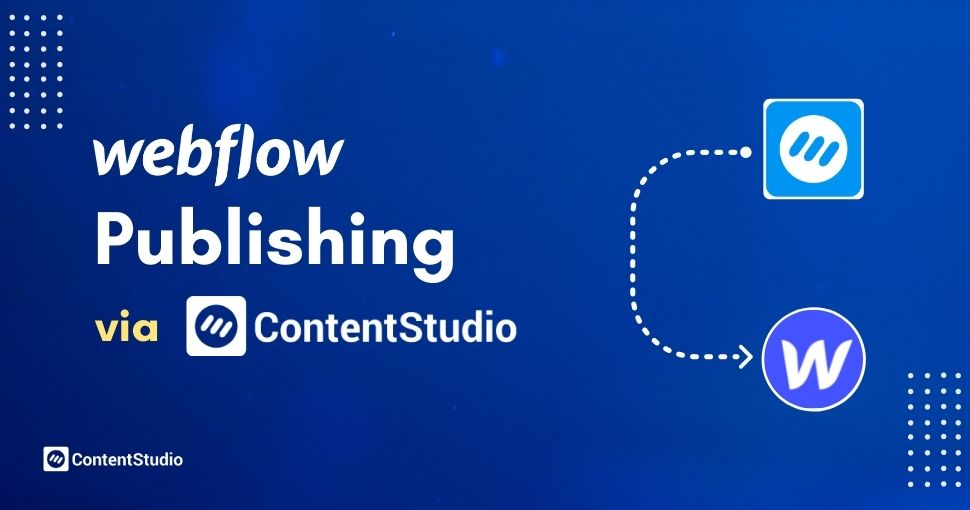 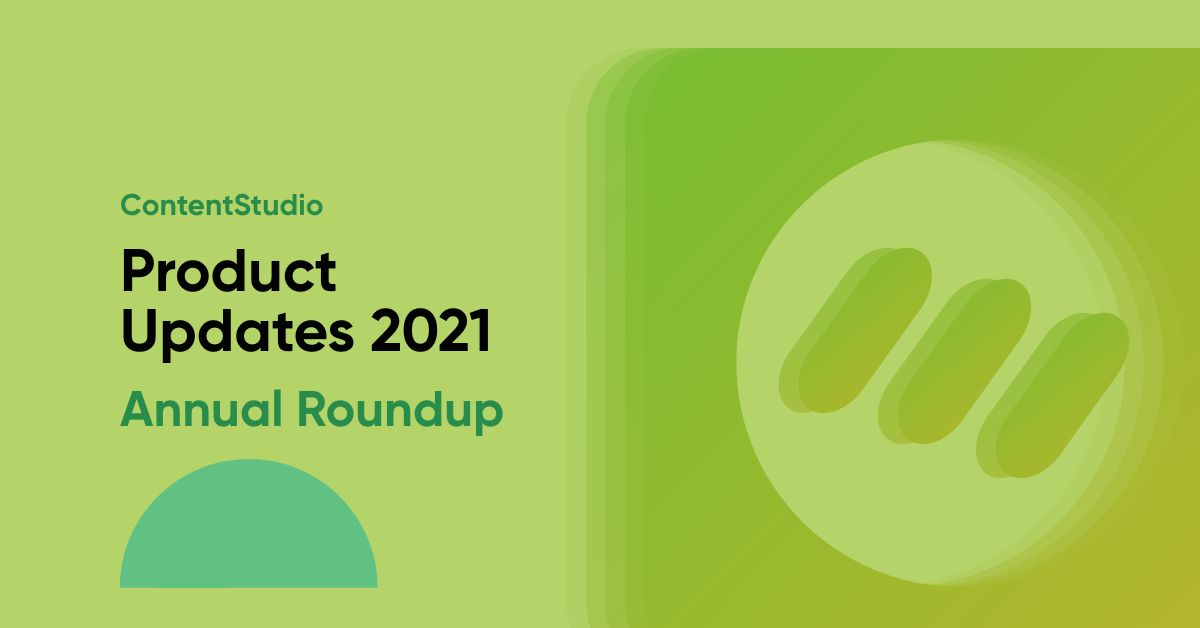 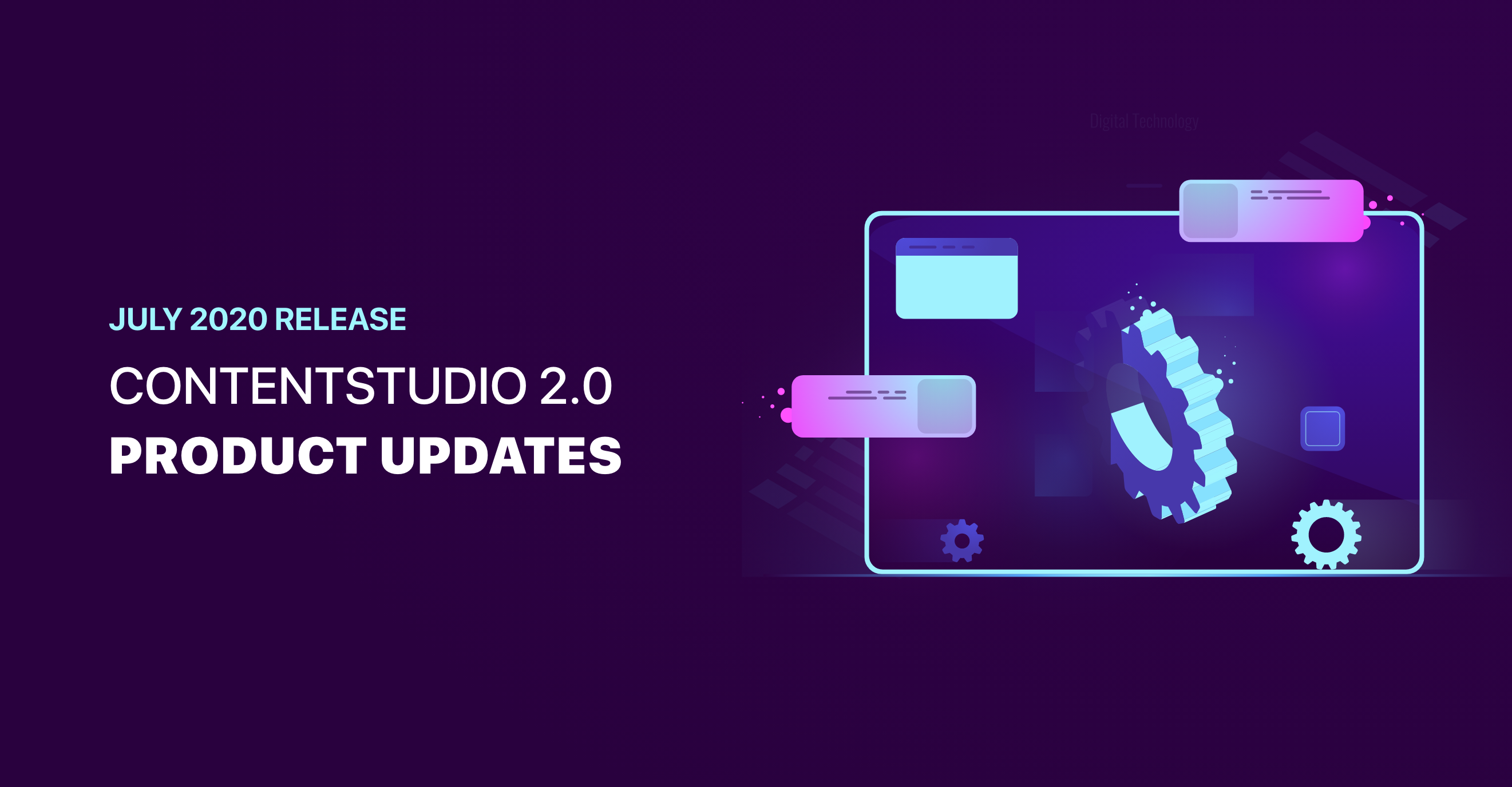 9 min read
Product Updates
I hope everyone has been enjoying their summer. This month, we at ContentStudio, are excited to introduce loads of new feature updates. These include new billing ...
Mariyum Noor

Monitor engaging and trending content in your industry, efficiently plan your content calendar, schedule posts across the top social networks and analyze all of your social channels from a single place.